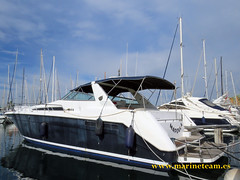 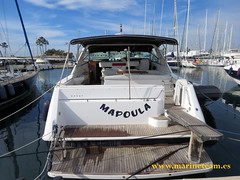 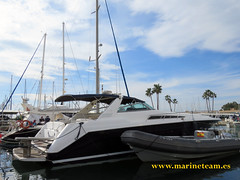 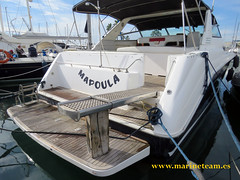 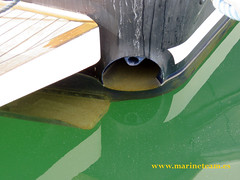 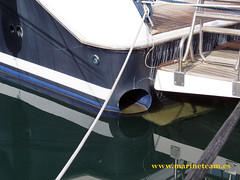 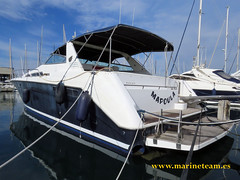 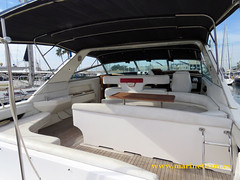 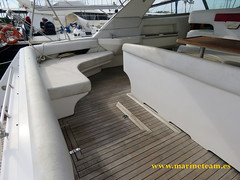 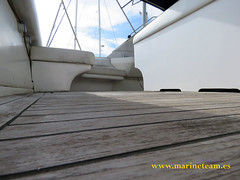 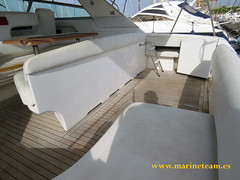 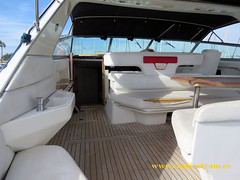 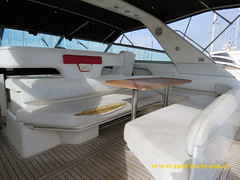 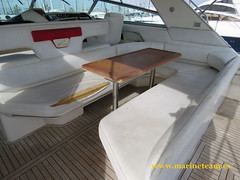 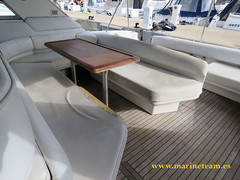 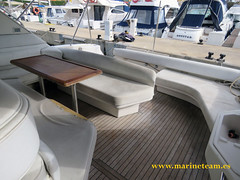 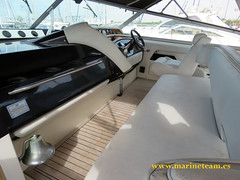 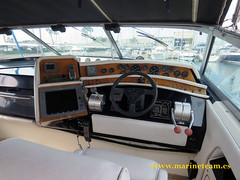 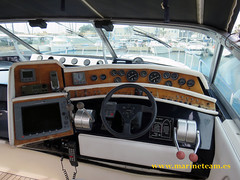 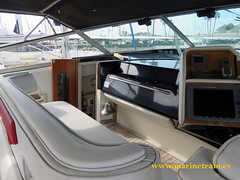 Built on
Her hull laminate is a blend of handlaid stitched multidirectional reinforcements, woven roving and polyester resin. A vinylester skin coat reduces the chance of blistering. A fiberglass grid system is molded separately from the hull and fiberglassed in place. Marine plywood bulkheads and ring frames are fiberglassed and mechanically fastened to the hull. Balsa coring stiffens the cockpit sole and foredeck. The hull-deck joint is mechanically fastened and bonded with fiberglass.

Lay out
Portside, across from the galley, the guest stateroom includes a double bed with upper berth, cedar hanging locker, and full head with vanity and shower. Forward, a comfortable settee and a queen-size bed with custom designed sheets and bedspread grace the master stateroom. Cedar-lined hanging lockers with mirrored doors and a large mirrored dresser are included. The en-suite master head has a ceramic tile floor, VacuFlush head, vanity, and shower with a built-in seat.

Comments
Second owner boat since1998. Usual navigation in Valencia´s coastal waters. This boat has been an example of the best looking after and maintenance onboard, with continuous improvements. Unfortunately, the owner stopped this using and maintenance  because age/health reasons. That is because he sales her.

Sea Ray’s 480/500 Sundancer made a name for itself by providing a roomy platform for on-the-water fun. Not much has changed.

In the early 1990s, Sea Ray built a 50-foot express that combined a huge cockpit with an interior arrangement that flowed from social area to sleeping quarters. The likes of it weren’t duplicated for decades. Riva, Sunseeker, and Fairline were her rivals then—mostly overseas builds—with a smattering of Magnums added to the mix. Many boatbuilders produce express-style cruisers, but, in my opinion, the 20-year-old 480/500 Sundancers still have appealing lines and offer quite the bang for the buck.

There are no more popular express cruisers than those produced by Sea Ray. The company’s current crop of models has not strayed far from the foundation laid by those early Sundancers. Since 1959 Sea Ray’s offerings have led the way with quality boats that heavily accent creature comforts. So it’s no surprise to look on one popular used-boat Web site and see more than 8,000 of them—from 17 to 72 feet—available for purchase worldwide. (To clarify, in 1991 the model was known as the 480 and in 1992 officially earned 500 status. The hull dimensions and specifications remained identical.)

Kenneth Long and his son, Kevin, berth their 1991 480/500 Sundancer in Freeport, New York, and they are now going strong in their seventh season of ownership. Long’s Island is used as a weekend cruiser, but during the summer, Kevin stays aboard five nights a week.

“We bought the boat for its unbelievable capacity,” said Kevin. “The layout is great and as we talked to other Sea Ray owners, we found there’s a cult following for these models.”

The design features a bolt-on swim platform, while on newer models, this has been incorporated as part of the hull. The platform is perfect for staging a dive, storing water toys such as kayaks, or simply hanging out when at anchor. A freshwater shower is conveniently stationed beside the transom door.

The low-profile radar arch adds style to the vessel. While aesthetically appealing, I prefer the radar antenna to be a bit higher, both for performance and passenger safety. An extension can solve this issue.

Sleek lines and a cockpit ready for fun are hallmarks of this 1991 Sea Ray.

The cockpit takes full advantage of the 15-foot beam. Seating surrounds the entire area and there’s a large bench against the transom. Access to the engine room is via a cockpit hatch, and an aft-facing settee abuts the cockpit’s forward bulkhead.

The helm has a bench seat that accommodates four crewmembers. Sightlines, even for skippers of shorter stature, are excellent. The electronics are flush-mounted to port. But it might be a reach to refit today’s large-screen multifunction displays in the area.

The helm can accommodate one new MFD. Click to enlarge photo

Looking out over the foredeck from the helm is deceiving. The view could lead one to believe that the cabin is tight and offers less than ample headroom. Yet at almost 6 feet 3 inches, Kevin doesn’t even come close to bumping his head.

Guests will be floored once they venture below. First off, access is easy: It’s only three steps down to the saloon, not a steep six or seven steps as on other expresses. To starboard you’ll find a forward-facing circular settee and a counter with two stools. The counter is also a galley prep area. The galley itself is workable, even by today’s standards. A full-size refrigerator, coffee maker, and microwave are all placed in cutouts. A grabrail is positioned so the cook can be steady even under way.

The master stateroom easily lends itself to living aboard. The berth is large and there is stowage for a sizable wardrobe. The head, too, with its spacious stall shower, will not have an owner pining for the shore. A guest stateroom features wide upper/lower berths and the dayhead is comparable to that of the master.

The Detroit Diesel 6V-92s are mechanical diesels—they smoke on acceleration and are not the most fuel-efficient engines compared with the computer-controlled common-rail diesels of today.

The price will reflect the condition and completed upgrades. Canvas and electronics are definitely worth a close look.

Moving about the interior, the construction of the bulkheads and joinery is solid. There was not a creak or a groan when we jumped up and down on the sole; very impressive. Abundant natural light comes in via multiple ports and hatches, and contributes to an unmistakable open-air ambience below.

“This boat is solid as a rock,” commented the younger Long. “The DD 8-92s are hooked to V-drives and she cruises easily at 20 knots plus even through rough seas. We’ve had the boat as far south as Fort Lauderdale and she’s never let us down.”

The 480/500 was originally delivered with 485-hp 6V-71TI Detroit Diesels as standard and 550-hp 6V-92s and 735-hp 8V-92s as options. The latter produces a speedy 28-knot cruise. Postioning the engine room beneath the cockpit sole makes for abundant square footage and headroom in the saloon. The machinery space is easy to navigate, including areas outboard of the engines. Sea Ray placed the generator at the forward firewall behind the ladder, where there is plenty of service access. Bilge areas and hullsides are gelcoated.

When you compare this ruggedly constructed 50 express to current models, she won’t whimper and hide. If you’re looking in the ballpark of $120,000, this is an excellent choice for comfort and style. Some Sea Ray owners are meticulous in their maintenance and cleanliness, resulting in good-value boats that barely show their age. And thanks to Sea Ray’s success as a boatbuilder, there is a good selection of preowned boats to choose from.