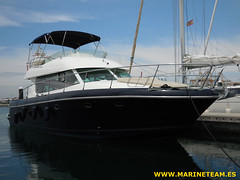 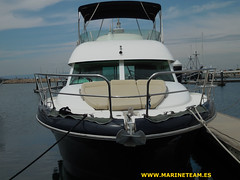 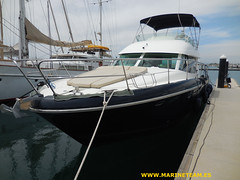 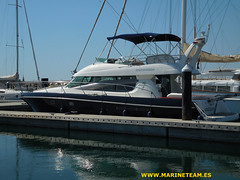 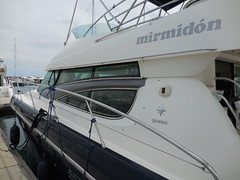 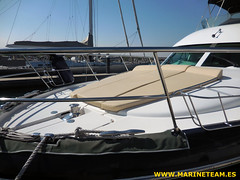 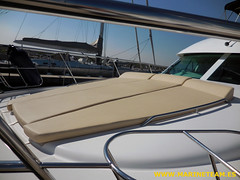 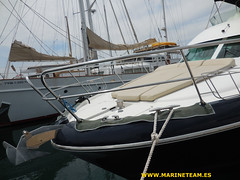 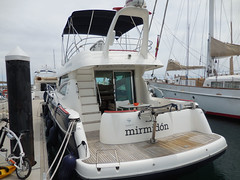 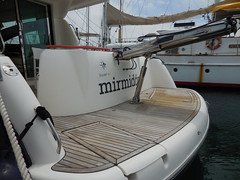 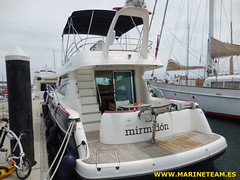 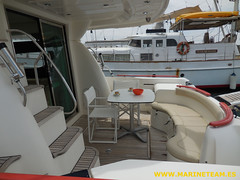 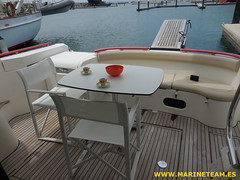 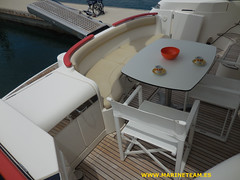 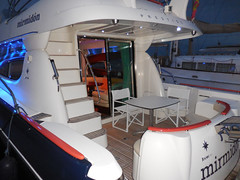 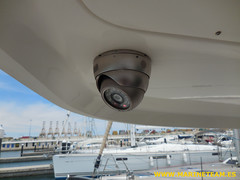 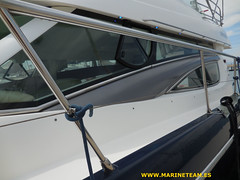 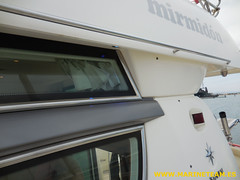 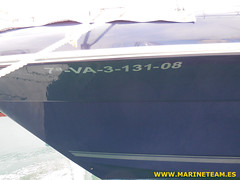 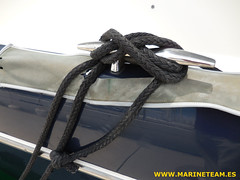 Coments by Yacht and Boat
Just like the cars we drive, a boat says something about its owner. So it’s no wonder people are attracted to the sleekness and sophistication of Jeanneau motoryachts.
The Jeanneau 46 is French, it’s stylish, elegant and not over done. The sleek lines of the hull and the split-level cabin windows are distinctively Jeanneau. Now, slide open the stainless steel-framed cabin door and enter the unique world of the European design studio of Garroni and Musio Sale.

CLEVER DESIGN
There is only so much that can be done with the interior of a 46-foot boat, but the design team has come up with something special on this Jeanneau. Clever use has been made of mahogany woodwork, cream leather and stainless steel to create a modern, elegant ambience.
There is the usual lounge with a foldout table and bench seat opposite. The adjustable table can be taken out quickly by undoing a couple of large thumbscrews. An entertainment centre has been incorporated neatly into the back of the staircase to the upper deck on the port side. The cabin is finished off with Venetian blinds on the lower windows and curtains on the top. A wooden, inlaid star feature breaks up the cabin roof lining effectively. Although the floor is laid teak and holly, the test boat had carpet, which added to the warmth of the cabin.
The galley is set down slightly, but still remains part of the main cabin, so anyone working there won’t feel left out of the party. It’s a unique design with two stainless hand rails either side of the entrance and a glass-serving top. It comes equipped with a cook-top and a small range hood to take away cooking smells, plus a microwave and deep drawers for plates and glasses. A neat feature is the integrated fridge door to match the surrounding cupboards and the baskets in the floor storage lockers.
The lower helm station is slightly raised, but it still remains part of the cabin. There’s a seat for two people and a full set of instruments mounted in a large burl console, with a smaller one in front for the plotter and autopilot controls. The Volvo Penta EDC controls are mounted on an angle and fall readily to hand, while the switches for the genset and shore power are set under the console under a protective Perspex cover. Also incorporated in the console is a glove box, with a Perspex cover and a solid stainless steel fi ddle rail that doubles as a handle for passengers to hang onto.
Opposite the helm station is a small dinette the same height as the driver’s seat. The table is set on a stainless frame and has a couple of handholds that are useful when stepping up to the seats.
Now for the big surprise! There are three cabins – four if you count the European style crew quarters aft under the circular lounge – with double berths. Not bad for a boat under 50 feet. The island berth in the owner’s cabin has a slotted base and lift s up on a gas strut to get to the storage underneath. There’s a couple of drawers under the bed that are so deep the cabin door needs to be closed to pull them all the way out. The berths in the guest cabins can be separated to form single bunks.
There are his and hers lined hanging lockers in the owner’s cabin and the ladies will love the full-length mirror on the back of the bathroom door that opens into the cabin. There are two bathrooms featuring showers with circular screens.
Up top, the entertainment area is large. A big sun-pad lifts up to form a second seat around the circular table. There’s also room for the driver and a friend at the upper helm station.

PERFORMANCE & HANDLING
The test boat was powered by twin Volvo Penta 480hp diesels. But Jeanneau is changing to Cummins for its 2006 models.
The hull has a solid feel and with the bow trimmed down slightly, the 46 cruises at 2000rpm and 17.5 knots. At 2500rpm the GPS read 26.2 knots and wide open at 2700rpm on the day we saw 28 knots. We were pushing a couple of knots of tide at the time, so on a good day it should see around 30 knots.
The engine exhaust is expelled underwater and this, coupled with the insulation around the engine room, keeps the boat quiet. At 20 knots the sound level meter read 69.5dB-A up top, while in the main cabin the level was only 71.9 dB-A.
We found a couple of nasty waves out through the Seaway, but it didn’t fuss the 46. We backed off the throttles and the boat rose over the top and fell softly down the back. Outside we settled into a comfortable cruising speed of 21-22 knots with the tabs trimmed up about half way.
The handling is predictable; she rises smoothly onto the plane and turns in a wide, graceful curve. Using a combination of the engines and bow thruster it will turn around its own axis, which makes it easy to reverse park in a tight marina.
Coming back in, the Seaway felt safe, despite a couple of waves building up behind. The boat, with some bow-up trim, sat easily on the back of the wave in front.
The deck is clean with serious stainless steel mooring cleats, forward, amidships and aft . The aft cleats and fairleads are hidden under lift -up covers on the gunwales that also reveal large rope bins which keeps everything nice and tidy in the marina. There’s also a feature not found on many motoryachts – the portside deck is 50mm wider than the starboard side and is designed to provide a little extra deck space if someone has to get forward in a hurry. You just have to remember to rush up the portside, although it probably doesn’t matter, because the starboard side deck is 250mm wide anyway.
The Besenzoni hydraulic gangway is an optional extra and in Australia it’s probably best used to lift the dinghy onto the marlin board. The gangway comes in a 110kg or 300kg version.
Pricing for the Jeanneau 46, with twin Cummins 490hp diesels, starts at $981,617 and includes a bowthruster, cushions for the foredeck sun pad, external window curtains and removable carpet in the saloon and companionway.

IN BRIEF…
From the first wooden dinghy that was made in 1957 to today’s Sun Odyssey 54 DS, by way of the first fibreglass hull built in 1960, Jeanneau has accumulated considerable technical expertise and has consistently participated in world premier racing events.
The results of many years of experience and research are proven by the numerous patents belonging to Jeanneau, demonstrating the ongoing and consistent capacity for innovation held by each member of the Jeanneau team. Thanks to these technological accomplishments, to the construction methods, to the careful attention to detail during production, and to rigorous controls, the reliability of its boats has become world-renowned. This reliability was formally recognized when, in 1994, Jeanneau was officially awarded ISO 9002 certification in fiberglass boat-building ISO 9001 in 2001 and ISO 14001 in 2004.