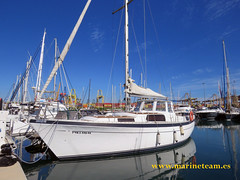 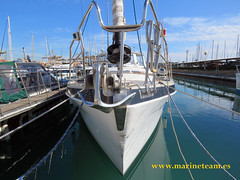 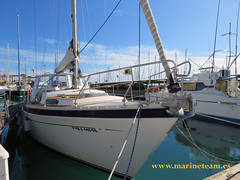 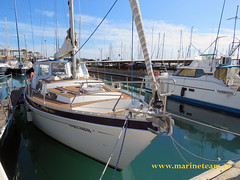 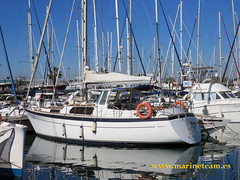 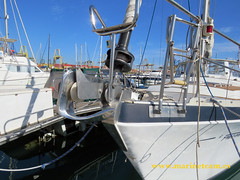 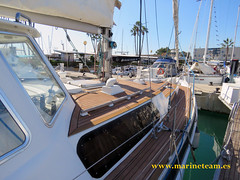 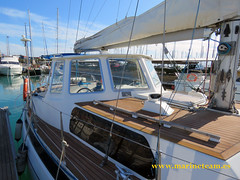 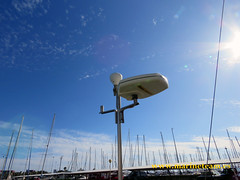 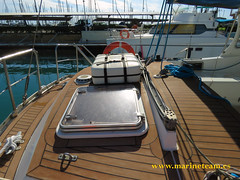 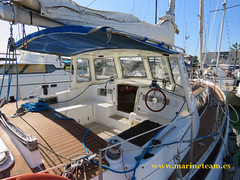 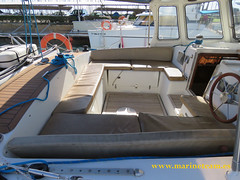 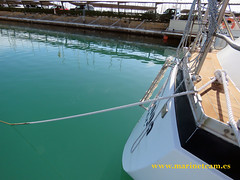 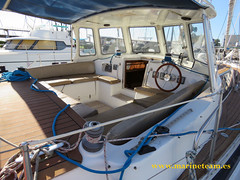 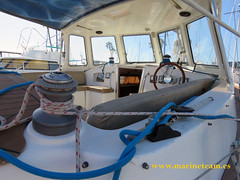 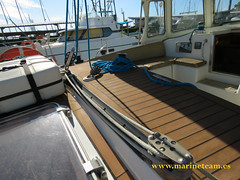 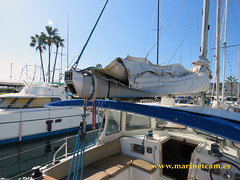 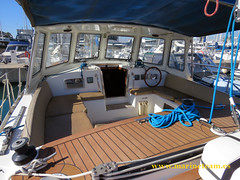 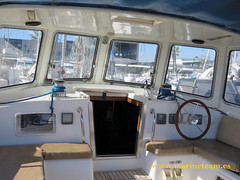 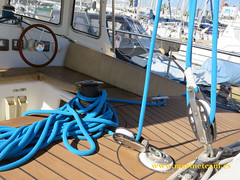 Distribution
Central cockpit with dockhouse. Wide corridors at the bow. Aft owner’s cabin with ensuite bathroom. Double cabin in bow. Cabin in bow corridor to port with 2 bunks beads. U-shaped saloon on port side in front of chart table. Kitchen in aft corridor.

Comments
Second  owner.
This boat crossed the Atlantic in 2003 on the TRANSARC, from the Canary Islands to Brazil. And returned on the northern route through the Azores that same year. Since then she has been sailing regularly in the coastal waters of Valencia.
After the crossing, the main engine was changed in Valencia in 2003. Change of mast and standing rigging 2006. Change of genoa 2009, and a long etc..
This is a sailing boat well known by all the members of the Real Club Náutico de Valencia, as the owner and his crew are a fun group of octogenarians, passionate about sailing, who meet every Thursday on board to sail and have lunch together.

Description of Moody Yachts
The Moody 39 is a direct development of the very successful Moody 33. A light displacement boat with a very large beam to allow for stability and maximum accommodation. A roomy saloon is situated forward of the centre cockpit and houses a ‘U’ shaped settee which is convertible to a double berth, opposite is the chart table and galley and access to after cabin. The aft or owner’s cabin is accessible via a passage below decks from the saloon. It contains one large double berth, dressing table, wardrobe, stowage lockers, wc, and shower compartment. Passage way from saloon to aft cabin contains locker and wardrobe space plus access to the engine compartment. There is a guest cabin forward of the saloon to port, it features two berths one over the other, and a sliding door to the passage. Opposite there is a spacious wc/shower. The fo’c’s’le cabin two berths convertible to double.

The concept and design of Moody 39 centre cockpit fin keel model was completed by Angus Primrose in 1972 and tooling was completed in November of that year. This was first production yacht developed jointly between A.H. Moody & Son Ltd, Southampton and Marine Projects (Plymouth) Limited. It was an immediate success and models have appeared ever since. Power and Sail magazine, October 1974: ‘Planned as a comfortable family cruising yacht of light displacement and with a high performance under sail or power, the Moody 39 shows many of the characteristics to be found in the more trendy production yachts of today. Clean, smooth, sleek and with high freeboard, a carefully calculated layout below decks, a roomy central cockpit with two-berth cabin aft, a simple masthead sloop rig, and the fin keel and skeg rudder profile expected of fast yachts, the Moody 39 has all these and a good deal more besides’.