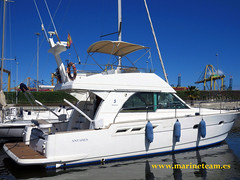 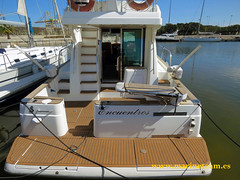 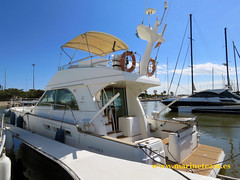 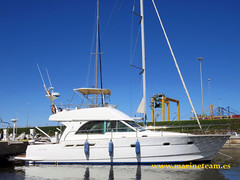 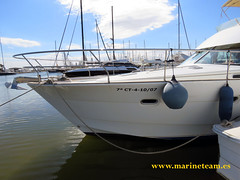 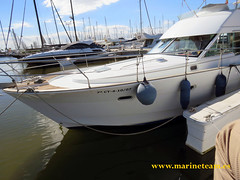 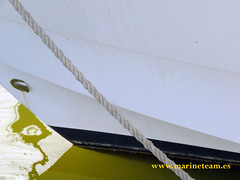 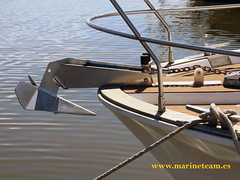 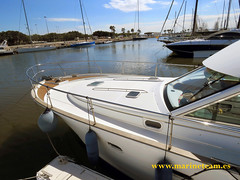 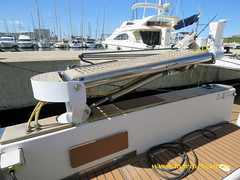 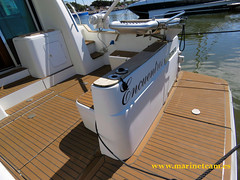 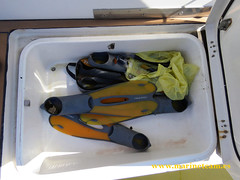 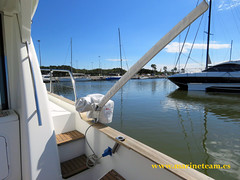 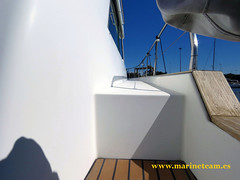 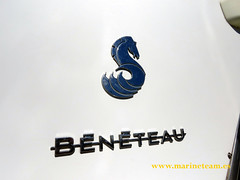 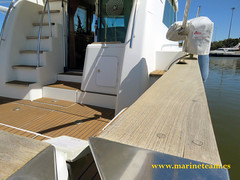 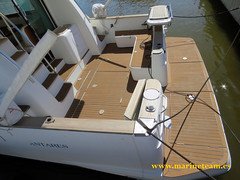 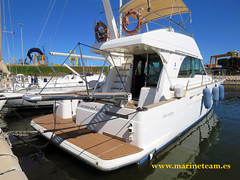 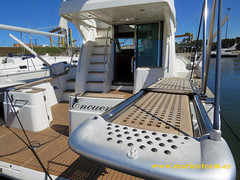 Built in
Hull in solid fiberglass PRFV and core sandwich over waterline.

Lay Out
Huge swim platform with easy acces to cockpit. Lot of storage lockers in cockpit. Sures side walks to forward. Flat foredeck with sun bed. Integrated ladder to fly. Wet bar and salón in fly.
Light and volumen in salón with U shape sofa in starboard and entertaiment área on port side. Long kitchen with appliances. Helm station with high enough and bench for 2 persons.
Down stairs, forward master cabin with head ensuite and separate shower. Aft port side cabin with double bed. Starboard aft cabin with 2 twin beds. Aft head with shower.

Tested by
Beneteau’s flagship, the Antares 13.80, is part of a range of cabin boats starting at 9m. Unlike most production motorboats, the Antares 13.80 is the result of a collaborative effort between boatbuilder, designer and engine manufacturer Volvo.

The Antares hull makes the most of the motors. There is a flat shaft angle, half tunnels and underwater exhausts that really do reduce running noise to a murmur. Construction is balsa-cored sandwich below the waterline and solid GRP decks and liners. Displacement stands at 11,900kg (dry), which is more than 10 per cent lighter than, say, a Fairline Phantom 46. Yet the boat doesn’t feel skittish or lively.

Tied to Jones Street Wharf, the Antares 13.80 takes on the appearance of a traditional cruiser, almost reminiscent of a semi-displacement passagemaker such as a Grand Banks or an HMG. Underway, the boat isn’t so tame – the modern planing hull exhibits a good turn of speed.

Adding to the clever disguise is a forest of teak decking and wide, ship-like bulwarks that lead to a huge flared foredeck. The boat looks seaworthy, like a passagemaker in which a couple might gad about the coast.

I really like the walkaround decks and the boat’s generous cockpit space. Both areas come at the expense of a full-width saloon. But the generous outdoor areas make for a great entertainer upon which you could host a French champagne cruise, drop anchor and party on, or go dolphin spotting.

I accessed the boat via the full-width boarding platform and noted a wide but inward-opening portside transom door.

There are two Besenzoni davits in case you want to swing a RIB, but the cleat for tying off the pulley line could be better positioned – that is to say, not located at a lounge backrest. Plastic covers conceal the shorepower connector and H/C deck shower, but most other deck fittings are sturdy and trendy. There is also a manual bilge pump and a liferaft locker on the boat.

Once aboard you will find that the transom doubles as an impromptu seat. Unlike most local boats, the Antares has a permanent moulded lounge wrapping around the starboard corner of the cockpit. There is room for four people and storage space beneath lounge base.

The terrific folding teak deckchairs and a portable dinette table in the saloon let you create an al fresco dining area for six. The chairs and lounges come with upholstered, cream-coloured vinyl cushions.

A bridge overhang offers shade for at least two people on the deckchairs, and alongside the companionway door into the saloon is a moulded sink with H/C water, cutting board and storage locker for the gas bottle. Very yachtie.

The highlight of the decks is the access to the bow. There are steps up to wide, teak-topped bulwarks backed by handrails and a high bowrail with an intermediate wire. The safe passageway makes for an all-over accessible boat.

In fact, the huge, flat foredeck is actually a second stage upon which sightseers, kids and couples can cruise. There are toerails, a central sunpad and a good anchoring setup with a windlass and a couple of deep, self-draining rope/chain lockers.

ENGINE ROOM
Despite there being no watertight rear bulkhead, the subfloor lazarette is set aside as a utility room for the genset, battery charger, batteries and lots of wiring leading to a circuit-breaker board.

There is a separate plumbing room inside the boat forward of the engine room with a 42lt hot-water service and pump-out tanks. Water capacity of 640lt in two tanks will cater for most extended trips away. A 60lt/h watermaker was fitted just in case.

The engine room is accessed via the lift-up moulded stairs leading inside the boat. Thanks to the aft utility room and plumbing room, the engine room is wonderfully spacious if not strangely empty.

Twin aluminium fuel tanks live on the centreline, forward of the motors, where they will have the least effect on the boat’s stability. The tanks are linked to Volvo fuel filters and sea strainers. There are remote fuel shutoffs outside the engine room.

The motors themselves rest on GRP bearers, which are also used to provide rigidity to the hull. Suffice to say there is generous servicing room around them. And I noted lots of sound insulation to supplement the underwater exhausts with idle-relief valves. Did I mention quiet?

A moulded staircase sweeps up from the cockpit to the bridge, which is small compared to some Euro motoryachts with extended top decks. There is adequate seating for the skipper and a swivel pedestal seat that is a bit tight to access for the mate. Guests can enjoy the views and lunch from the U-shaped lounge set around a small teak table to starboard.

The contemporary helm console has Volvo engine gauges where you can read them, EDC throttles and a hip silver sports wheel. However, I thought the trim-tab buttons were a bit close to the throttle.

There is an aft sunpad big enough for two people and a smart-looking radar arch reminiscent of something from a superyacht. Bridge amenities include a small moulded sink with a teak cutting-board lid. The boat had a factory-fitted optional flybridge canopy.

I noted bowthruster controls and a good view over the foredeck. I could also see back through the open transom door for parking. The bridge is traced by nice, high rails to help keep everyone contained up top.

While it is a small bridge, the big decks compensate. In party mode, you can drive from up top with a few close friends while the throng plays about at deck level. Should the weather turn nasty, no worries – the boat has a lower helm. With optional air conditioning fitted, the Antares is an all-seasons and all-climate boat.

You step up to the saloon through a big Plexiglass sliding door, which should ensure that the interior stays dry. Despite tinted side-opening windows, there were no leaks during our test.

In fact, the big flared bow makes for a very dry boat. And because the saloon is inboard from the bulwarks there isn’t a lot of ambient water around the windows.

Lining the port side of the saloon is one continuous timber counter concealing a pullout glass and bottle locker, storage space for the entertainment system or library, and an 80lt fridge. You could delete the glass locker and put a second drinks fridge or an icemaker in its place. Opposite that is a four-to-six-person lounge wrapping around the dinette. Ahead of that is the lower helm. Good views extend out the boat – use some tab to keep the bow down when driving – and the two-person leather seat was comfy.